The Impacts of the 400 Foot COA on the GIS Community

Only years ago, the collection and processing of orthoimagery to act as a base layer for geographic information systems (GIS) was limited to only those who could afford a plane and an expensive aerial camera, then came the emergence of drones to help democratize the collection of aerial imagery, and with it, came the 200 foot “blanket” Certificate of Authorization (COA) allowing FAA registered drone operations to fly in most rural areas in the US. On March 29th, 2016, the FAA released a new blanket COA to fly their drones at 400 feet, as opposed to the previous COA of 200 feet. While most might view this as simply a regulatory issue, this can have major impacts to the bottom line of any UAS operation and, consequently, GIS or engineering project.

Many drone operators spoken with just didn’t feel safe operating their systems at 200 feet, under the previous COA. While they would leverage the 200 foot COA to fly, they would still oftentimes fly at 400 feet for the drone’s safety, and for the safety of their job. After all, who wants to come back to their boss to let them know that you just crashed their piece of $20,000 equipment because it stalled into a tree? With a typical pine stand nearing 115 feet to 140 feet, this gives you little operational envelope to work in, in the event of a stall or loss of battery or signal. 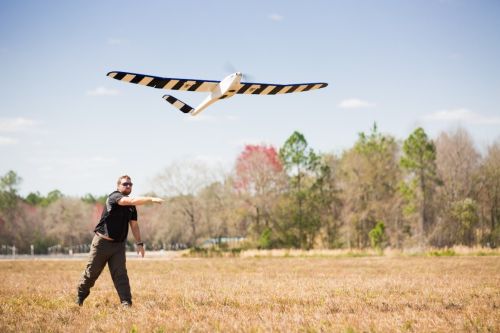 The worst thing in the world is to spend money to deploy to a location, fly it, and then get back to the hotel room, or office, only to realize that your flight will not process out to the orthomosaic your customer wanted. In order to fly at lower altitudes, your drone’s camera must also be able to adjust accordingly. The most important factors with generating an orthoimage is the focal length of the camera, and, while depending on the camera or the drone, flying at 200 feet would oftentimes mean that you would need to use a 20 mm lens. While the 20 mm lens is great, its design approaches that of a fish-eye lens, allowing you to have a much larger field of view. This, however, comes with a great sacrifice: image fidelity. Greater amounts of lens distortion is introduced into the raw imagery making it more difficult to post-process. It becomes particularly troublesome if your subject is corn or wheat. The homogeneity of a cross will confuse the software; packages, like Correlator3D and Pix4D, that rely on the matching of pixels to generate an aerotriangulation (AT) solution will oftentimes break down if you fly too close to various types of ground cover.

400 feet helps alleviate many of these concerns because now you are able to leverage, say, a 40 mm lens configuration that inherently has much less image distortion, while also being able to cover more ground.

With the ability to fly at 400 feet also brings with it significant cost savings to the end customer. If your project is priced out by the hour, your job would effectively be half the cost by being able to fly at the higher altitude. While this might have a minor impact to, say, a 50 acre job, when attempting to fly 20,000 acres, this can mean a difference in days. Now, flying at 400 feet, this could mean a savings in thousands of dollars in operating expenses.

The 400 foot COA is obviously a great step for the drone industry, however, operations are still limited. Most operations are still limited to rural areas and mining operations. The next steps to help improve the viability of drone operations will be to open up the skies over more populated areas, where capital improvement investments are being made. This is traditionally what has driven the orthoimagery market in the first place: being able to detect and document change in a GIS.

In addition to being able to fly over populated areas (legally and responsibly) another area that will help improve the economics of drone operations is the ability to fly beyond line of sight. This will allow operations to reduce the inefficient process of mobilizing and demobilizing from location to location.