Welcome Back to Part 3 of our series, Smart Military Bases - Resiliency in GIS.

Is there a reoccurring theme for Smart Base projects?

Location is a component of nearly every Smart Military Base project and Geographic Information Systems (GIS) become the central platform to leverage for these initiatives. As discussed earlier in this series, most military installations have an existing, mature mapping platform complete with GIS data for the entire base infrastructure and environment.

GIS for bases goes back almost three decades. In 1992, the Army, Navy and Air Force established the Tri-Service CADD/GIS Technology Center at the U.S. Army Corps of Engineers’ U.S. Waterways Experiment Station in Vicksburg, MS. As installation mapping was migrating from manual processes and hard copy maps to digital in both Computer Aided Drafting Design (CADD) and Geographic Information Systems (GIS), they established the Tri-Service Spatial Data Standards (TSSDS). This laid the groundwork for what is known today as the Spatial Data Standards for Facilities, Infrastructure and Environment (SDSFIE).  The importance of this early history is that it established a mature, reliable platform of data and practices in GIS for bases, known today as Installations Geospatial Information and Services (IGI&S).

Beyond just the traditional uses of IGI&S for a base such as planning, environmental, real property, and facility management, it is used for security, public safety, energy efficiency, and several other use cases. This is an accelerator for Smart Base projects as a reliable platform of GIS data and services that exist to enable a Smart Base project to integrate with location intelligence.

The IGI&S Platform for Smart Bases

In article 2 of this blog series, we introduced the WebGIS platform as a component of Smart Base technology that brings services, technology, and applications together. While IGI&S is actually more than a platform, many installations across all DoD branches have access to or have currently deployed an IGI&S capability that includes a GIS Platform. Increasingly at larger installations, regional and command levels, and at a Headquarters level, these installations have deployed a WebGIS Platform.  Each branch of the service has their own IGI&S Program with its own WebGIS Platform:

For a successful Smart Base Project, integrating IoT Sensors and meeting an objective at an individual base, each installation requires access to a performant and scalable WebGIS Platform. Installations vary in size, scope, mission, and funding. When it comes to IGI&S, not all bases have their own IGI&S resources on site. Some are managed at a regional level. While many of the larger installations do have the capability and resources, bases without an IGI&S capability still have the GIS data needed both for infrastructure and environment.

So, there is an extremely high probability that a WebGIS Platform or reliable, standards-based mapping data does exist and is available for use at every installation. As a result, the GIS can be leveraged to quickly integrate Smart Base projects, bringing the component of “Where” into focus. Any Smart Base project involving sensors, the movement of people or vehicles, or even security and safety can take advantage of the existing and ready to use spatial capability that exists for our military installations today. It is not limited to only those use case examples. Over the course of decades, as IGI&S has evolved, GIS has been used in a variety of ways with the same objectives as Smart Base projects to improve operations and increase residency of our installations in the future.

How Can Location Data Be Used?

Before the term ‘Smart Base’ and Smart Base technology existed, GIS/Location Data has been used to improve the efficiency, effectiveness, and operations of an installation. Since the 1990’s, GISinc has designed, developed and implemented location intelligence solutions using GIS for bases including these few examples:

Traditionally, GIS has been used as a function of public works, environmental, and real property management at an installation. But it can be about so much more—it can support resiliency, security, and help avoid disruption. The U.S. Army is currently exploring multiple smart technologies and projects for bases, including solutions for energy resiliency, autonomous vehicles, and frictionless base entry. All of these projects include a spatial component. Leveraging the base IGI&S capability will fuel a platform for users to visualize and react to Smart Base capabilities.

IoT Sensors, both stationary or mobile, can be shown on a map in near real-time with their measures and reported data displayed spatially as a part of a base’s common installation dashboard. Maps provide a powerful visualization that make it easier to see and understand patterns of movement and behavior of things we can and cannot see. Including location data (GIS) in Smart Base projects amplifies results and increases the return on investment because users can see, relate, and react to the technology spatially.

In our next and final blog of this series, we will explore GIS Solutions for Smart Bases in more detail. Location Data has been developed and in existence, evolving and maturing, over the course of decades and is a logical fit for Smart Base projects. In many ways, location data has already been used and proven successful for smart technologies on bases ranging from energy efficiency to safety and security. Now, combined with Smart technology components like IoT Sensors and 5G Networks, location data with GIS as a platform can take U.S. Military Installations to new levels for improving and ensuring resiliency.

Interested in learning more about this topic? Register for our Smart Bases Webinar! 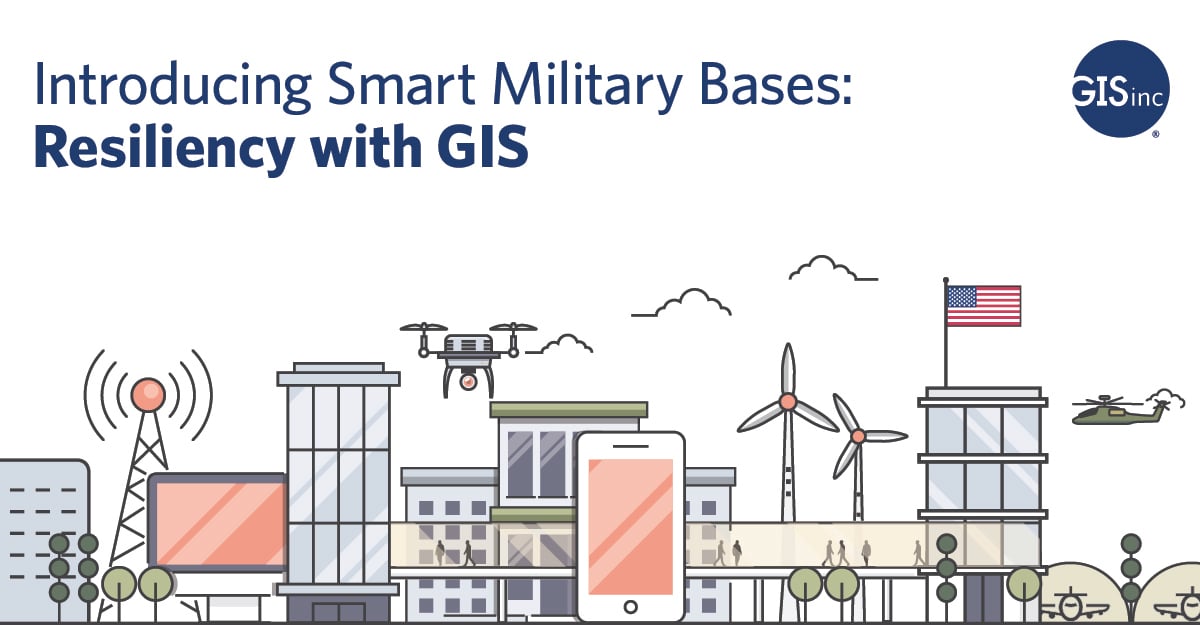