The Adventures of the Lucky Blue Power Ranger – A Geocaching Story

Many years ago we went on vacation to Orange Beach, Alabama. My son was quite young at the time, maybe four, and had a beat-up Blue Power Ranger action figure that we bought at a yard sale. As kids have the tendency to do with their favorite toys, he carried it everywhere. One day, as we got on the elevator in the high-rise beach condo where we were staying, he dropped it and it fell through a crack and down the elevator shaft.

He was very sad.

We asked the condo manager if there was anything we could do and she said she'd check with maintenance. The next day when we came down for breakfast, there was the Blue Ranger on the lobby desk.

We told the story to some coworker friends who were also in town and the next day we left the beach. On the way out, we rode the ferry across Mobile Bay to Dauphin Island and went to the Estuarium there. Guess what? We left the Blue Ranger there and didn't realize it until we were halfway home. It didn’t make sense for us to turn around so unfortunately that was going to be the end of the Blue Power Ranger.

Or so we thought.

When I got back to work on Monday morning, the Blue Ranger was sitting on the computer monitor in my office. Our work friends had gone to the Estuarium the day after us, saw the Ranger in the Lost and Found box, surreptitiously grabbed him (the clerk wouldn't give it to them), and brought it back home.

Since it was obvious the Power Ranger had a knack for getting back home, a few years later we decided to create a geocaching “Travel Bug” out of it. A Travel Bug is where you attach a metal dog tag with a tracking number to an object, write up a little about the object – its history, its goals, or whatever – and place it in a geocache. When other geocachers find it, they look up the tracking number online, write on its log, and then put in another geocache for someone else to find, again logging its location. Sometimes people take pictures or post stories related to the item.

Sitting with some other Travel Bugs

We placed the Lucky Blue Power Ranger in a geocache near Orange Beach with a simple mission to get back to home to Huntsville, Alabama. It only took one find for someone to return it to Huntsville, where it bounced around a couple of local caches before we retrieved it, which was kind of anti-climactic.

We needed a bigger challenge.

My wife was chaperoning a student trip to the United Kingdom, so I made an arrangement through the geocaching forums for her to hand it off to a local geocacher in Shrewsbury, England, again with the mission to get back home.

He traveled through a few caches around southern England before an out-of-country tourist found him.

And carried him to Australia. 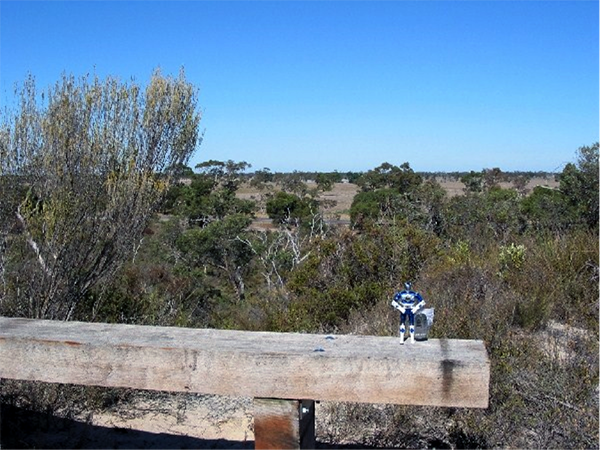 Standing in Kelvin Powrie Reserve waiting for tourists to come along and give him a lift back to America.

He went from cache to cache Down Under, enjoying a beer in Brisbane and taking in the local sites, but since he was literally on the other side of the world, we figured his chance of returning was slim. 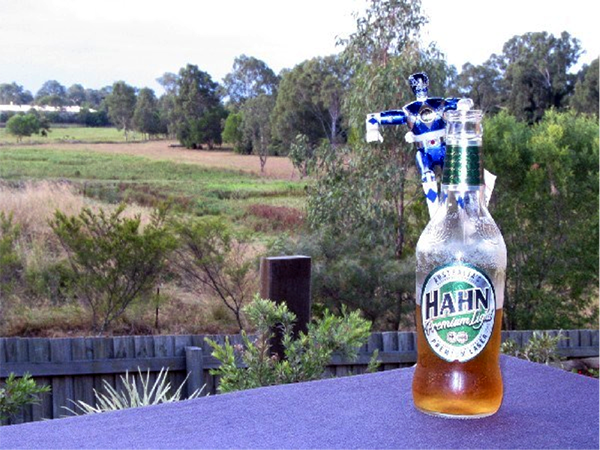 Having a beer in Brisbane, Australia

After a few months, another world traveler picked him up and carried him a bit closer to home, but only to Reykjavik, Iceland, and placed him in a cache near a geothermal plant fed by Iceland’s volcanic activity. After a short stay there, though, he was returned to the United States.

He was closer to home now, in North Carolina, but that was as close as he got. He eventually wandered to Virginia and West Virginia, then headed west to Kentucky, Ohio, Indiana, Illinois, Iowa, Nebraska, South Dakota, Wyoming, Idaho, Oregon, and Washington state. Then back across the U.S. through Montana, North Dakota, Minnesota, Wisconsin, Michigan, Maryland, North Carolina (close again!), then to Massachusetts.

In Massachusetts, his luck ran out.

Eight years ago, in September 2006, he was placed in a cache in Goodwill Park in Falmouth where he disappeared. Several people tried to locate him, but logged DNFs (Did Not Find). We assumed that either the cache was vandalized or someone picked him up, not knowing about the Travel Bug tag, and he was lost.

While we were disappointed that he didn’t make it home, the whole experience was fun and educational. As each report of his travels reached us, we would get online and look up where he was on maps, searching for online photos and looking at nearby cities and attractions. We learned about the world and imagined traveling to each place. We used the Blue Power Ranger as a surrogate as we virtually traveled around the world. We kept a map that showed his course with pushpins. According to Geocaching.com, the minimum straight-line distance he traveled from geocache to geocache was over 35,000 miles and the actual distance was probably a lot more than that. My son is a sophomore in college now, but we still joke about the Lucky Blue Power Ranger when something gets lost or left behind on a trip. 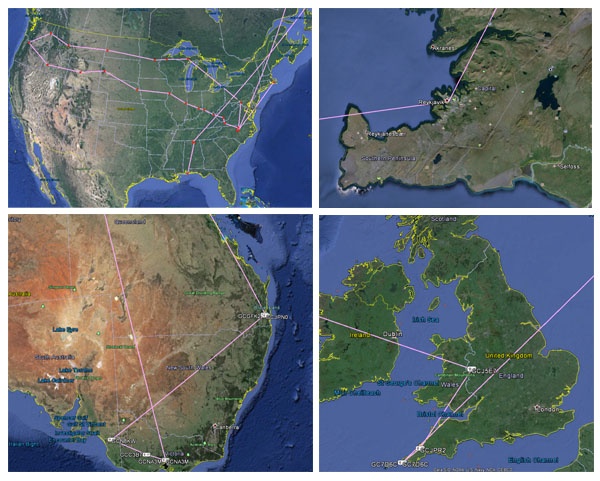 A week or so ago, I got an email from a woman in Cape Cod. She was cleaning her son’s room, donating old toys to charity, and she found the Lucky Blue Power Ranger, still with the Travel Bug tag attached. Apparently, her son had picked it up and never showed it to them to log and it had been forgotten in the bottom of a toy box for all those years. She mailed him back to me.

Now he’s sitting on my monitor as I type this and I’m trying to figure out where he should go next. Maybe to space? Hopefully his luck will hold out. 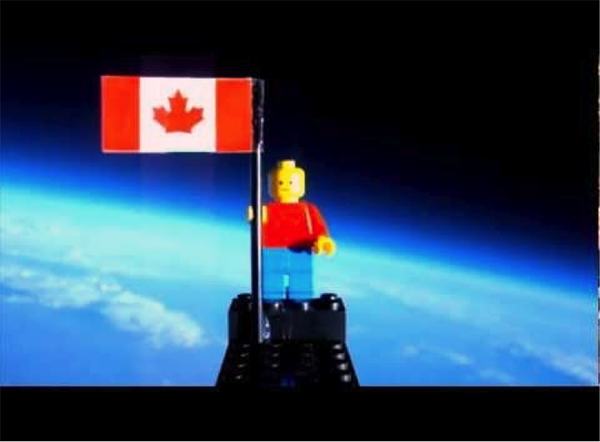