I am the "new girl”. Everything about my life this year is new – new job, new city, new friends, new everything. I guess that can be a scary thing when you have called another city “home” for the majority of your life and suddenly find yourself living 4 hours away in this beautiful place called Birmingham. Not to mention the challenges of understanding GIS (Geospatial Information Systems), the technology around it, and the brilliant people who make up the GIS community. At first I was surprised that a GIS community actually exists. Who knew there are a lot of people all over the world who love what geography and technology both have the ability to do?

So to help overcome a few of my new girl challenges I created a story map that would allow me to learn and explore parts of my new home in Birmingham while experimenting with Esri’s ArcGIS Online for the first time. And since Halloween was coming up and I’ve always been intrigued with haunted places, I went with “Haunted Birmingham” as my story map theme.

There are two parts to my experience with this project. The first part focuses more on the stories behind these haunted places. The second part goes into what it was like actually making the story map in ArcGIS Online. We’ll go into the first part in this article.

Researching and Visiting the Haunted Locations

I kicked-off my project by using search engines to find a few locations around Birmingham that are rumored to be haunted. When it comes to ghost stories, I like to keep an open mind. I realized that many of the stories could be pure urban legend, while others could genuinely fall into the category of unexplainable occurrences. I didn’t want to catalog every single road, school, or patch of woods in Birmingham that was rumored to be haunted. Instead, as I researched, I looked for ghost stories of allegedly haunted places that would also tell a story about Birmingham’s rich history. And while most of my research was done online, I did get feedback from a few Birmingham natives as well. We narrowed the list down to six places to highlight.

I didn’t actually go inside of any of the locations on my list because there is something about experiencing a place while you’re completely alone that adds a different dimension. Or to put it another way, going all by yourself without anyone around is a good way to get the full effect of the creepiness, especially if you believe in ghosts.

The first thing I thought of as I studied the appearance of Arlington Antebellum Home was how could a place so beautiful fall into the category of "haunted house"? But then as I approached the house with my camera, my mind began to focus on the ground where I stood. This was the same ground walked by slaves and soldiers so many years ago. Among the beautiful homes like Arlington, there were people who suffered from the effects of war, slavery, illness, poverty, and death. Union soldiers planned the burning of the University of Alabama, my alma mater, right where I was standing. And I wondered what other events happened in this beautiful home that might explain why a rocking chair would rock on its own.

The University of Montevallo

There are so many tales of hauntings at the University of Montevallo. One is the story of Condie Cunningham, a student at the university around the turn of the century, who caught fire in her dorm while cooking fudge. There are reports that her spirit still haunts the halls of the building where the incident took place. Then there are stories of the King House, one the original structures on campus. The spirit of Mr. King, the home’s original owner, allegedly haunts this antebellum-era brick house. And finally Reynolds Hall, a hospital for wounded Confederate soldiers during the Civil War, with its story of Captain Henry Clay Reynolds returning to find the men in his care slaughtered by Union soldiers. As I snapped pictures of this old hospital, currently in use on campus, I couldn’t help but be amazed at how things were so different back then.

Directly across the street from the very modern-looking Birmingham Public Library, stands the Linn-Henley Research Library, which served as the main library until 1984. The Old Birmingham Public Library was once segregated and eventually desegregated after the heroic actions of civil rights activist Lola Hendricks, who brought a suit against the library system in Birmingham. Fant Thornley, who served as the library’s director, responded to her suit and managed to convince the library's board to desegregate the library system. So even if the stories of Thornley’s ghost appearing to library visitors are not true (I didn’t see him), this place certainly does hold a place in Birmingham's Civil Rights history.

A part of me was hoping to see the ghost dog of former hotel owner, Clifford Stiles, looking out of one of the many hotel windows and barking at passers by. I didn’t notice anything creepy about this historic hotel. Perhaps I would feel a little differently if I were wandering the hallways alone in the middle of the night - which will never ever happen. Still, knowing this hotel was a glamorous hot spot in the roaring twenties made it a very neat place in Birmingham to include in our story map.

When people think of haunted places in Birmingham, the old Sloss Furnaces site is usually the first place that comes to mind. It was the one and only place I included on the story map that gave me the creeps when I visited. While I didn’t see or hear anything particularly weird, when I later reviewed my pictures, I did notice an odd image in one of the photos I snapped. Though I suppose the dark figure in my picture could really be anything, it did add a little bit of creepiness to my adventure. 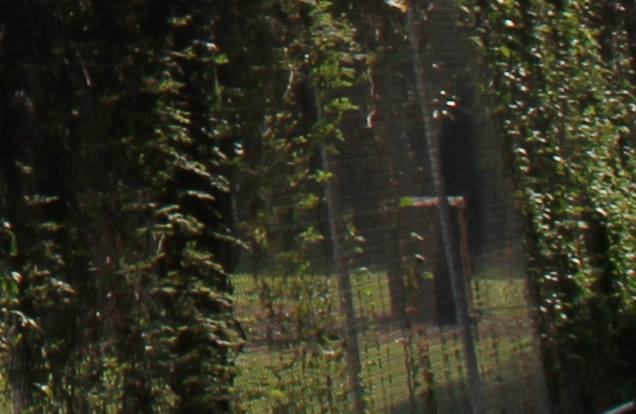 Sloss is a Birmingham landmark and if you dig into its past, or take a tour of the furnace, you’ll discover quite a lot of history about our “steel city”.

This location really got my attention with the Electronic Voice Phenomena (EVP) videos people have posted online from the cemetery. Not to mention the cemetery’s isolation, the old grave markers, and of course the fact that it’s a cemetery and should, by nature, be a very creepy place. When I arrived at the location for the photo shoot, I fully expected to be shaking in my sandals…but instead I found a very peaceful and quiet place, though a lot of the headstones were badly vandalized. I suppose if any real ghosts do appear, they only do so to remind the cemetery visitors to show their home a little respect. 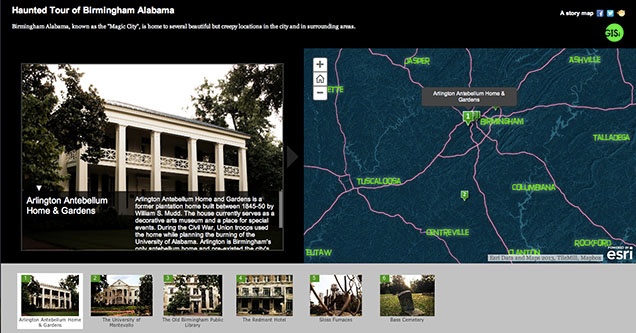 I learned quite a lot about my new home and it was a neat experience to see all of these places in person after researching their history. The actual story map was a lot of fun to put together and I like how it turned out. You can view it here if you would like a "Haunted Tour of Birmingham".

Be sure to check out part two of this series for details of how I created the story map in ArcGIS Online.