Savannah, Georgia, is known as the most haunted city in America. Yet having lived near Savannah for almost 15 years, I have never been on even one of those haunted city tours that run every night of the week. I have always wanted to go on one, but to be honest, I’m kind of chicken. Maybe knowing what the tours have in store would ease my fears.

The Internet is crawling with haunted stories about Savannah’s downtown, so I made a list of the places I found the most about. I packed my camera and tripod and set off one evening to explore haunted Savannah on my own. I’m not sure what I was thinking. Maybe it will be less creepy if I go alone?

As I went from place to place, I encountered several of those haunted tour groups. But some of the places I went, I was all alone. I set up my tripod, snapped my picture, and got out of there as fast as I could. At one stop, the Kehoe House, a man came up to me and asked what I was doing. When I told him about my project, he told me he was staying in the house in room 201 (I later learned to be one of the most haunted rooms in the house), and he confirmed, “there is definitely something there”. Whoa! How many stops did I have left?

Here is my story map (best viewed in Chrome, IE, or the latest version of Safari). Be sure to stop by our blog tomorrow where I'll post details on how I put the story map together! 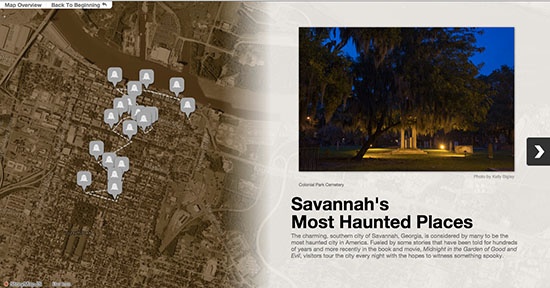