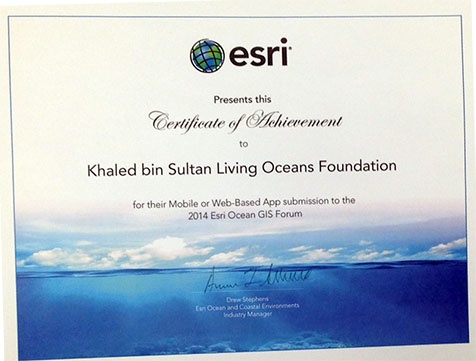 The Esri Ocean GIS Forum is a gathering of ocean and maritime professionals whose experiences range from ocean research to resource operations. The intent was to extend the reach of scientific ocean data to broader user communities. During the three-day forum, attendees were exposed to powerful geospatial technologies, exchanged ideas, shared best practices, and built professional networks. The 2nd Annual Esri Ocean Forum grew exponentially from last year’s inaugural event. Attendees came from all over the world and from many different sectors, including Federal and State government agencies, public and non-profit groups, high school and university students, research scientists, private companies, and more. The Forum was planned so that most presentations could be attended by all of the participants. Key themes of the event included:

Additionally, I presented a lightning talk on behalf of the Foundation, discussing their coral reef research and how the World Reef Map is solving a GIS problem: how to share big data with global researchers, students, and governments.

The Khaled bin Sultan Living Oceans Foundation, a client of GISi, was awarded first place award for their Maps and Apps Gallery Submission at the 2014 Esri Ocean Forum, held in Redlands, CA from November 5-7, 2014. The submission was for their World Reef Map (maps.lof.org/lof), which is a continually growing web map interface comprised of benthic habitat and bathymetric datasets.

In 2014, the Living Oceans Foundation has added new datasets to the World Reef Map for three countries since its initial launch in 2013. Coral reef benthic habitat structure and composition data, as well as bathymetry rasters, depth contours, underwater videos and dive site photos were published for the Galápagos Islands, Cook Islands and the Society Islands group within French Polynesia. The addition of these data brings the total number of countries mapped by the Foundation to 7 countries, and 42 islands or coral reef areas within those seven countries. These are big data consuming nearly 50GB of hard drive space at mapping resolutions of about 2 meters. In addition to a specialized Habitat Reporting Tool that generates printable and savable standardized benthic composition reports, the World Reef Map provides the capability to download the benthic habitat shapefiles and bathymetric rasters for local use. The Foundation is continually adding new datasets with the San Andreas Archipelago in Colombia and Fiji to be published in early 2015.