Last week three of us from GISi volunteered to survey manatees for the United States Geological Survey (USGS) in Guantanamo Bay, Cuba. The USGS’s research in Cuba is part of the Sirenia Project, which is a long-term project to study the life history, population dynamics, and ecological requirements of the West Indian manatee - the manatee species you may commonly see in Florida. The research efforts were headed by Jim Reid who is based out of the USGS Southeast Ecological Science Center based in Gainesville, Florida. His team of 7 people coordinated the capture boat, land-based netting and handling, manatee health assessments, spotters, and habitat surveyors; all of which were activities that volunteers could be involved with.

The West Indian manatee is a federally-listed endangered species. Fully understanding their life cycles and habitat zones, which include foraging, reproduction, and resting areas, is essential to their conservation. Manatees are commonly known as sea cows and are large, slow-moving mammals that are generally gentle. Their powerful tail packs a strong enough kick to knock a human to the ground and the weight of their bodies could shatter a human bone if pinned beneath a manatee. Manatees are herbivores, which means they only eat plants, preferably sea grass. The greatest threats to manatees are unfortunately human-related: boat-related injuries and deaths, habitat loss or gradation, and they are hunted in some countries as well. The life expectancy of a manatee is only about 60 years and they begin reproducing around age 4 with a gestation period of about 1 year, producing only 1-2 calves at a time.

From GISi Carlyn Hiller, Anthony Scardino, and I volunteered for all aspects of the manatee research but were primarily on the land-based netting team. We were the only volunteers who traveled from outside the military base to participate in the research efforts. The days were long, typically starting around 6:45 AM to begin “spotting” or looking for manatees in known manatee resting areas. Volunteers were strategically placed around these various coves with radios to call a “nose up” whenever a manatee came to the surface to breathe. Manatees in an active state tend to breathe every 2 minutes, but those in a resting state may take up to 20 minutes to take a breath. So, you can imagine very long, hot mornings watching and waiting for a manatee to take a breath or begin to leave its resting location.

In a cove, deemed “Manatee Cove”, there were two exit channels a manatee could take from its resting location. Both the land-based and boat-based teams set up nets, one at each exit channel. After monitoring manatees for two days in Manatee Cove, the USGS team decided to send in a small boat to encourage the manatees to make a move. Within minutes, the land-based team had caught a 7-foot long, sub-adult female in their 100-foot long net. Our team of about 20 people gave the biggest game of tug-of-war to close the net without letting the manatee escape beneath the net. There are floats on the water surface and a weighted, lead line sitting on the bottom. If you pull the net too quickly, the lead line will come off the bottom and the manatee has an easy way out. We learned that lesson the day before. It certainly takes some finessing to get the pulling right. This manatee gave a little bit of a struggle, but no one was hurt by her whipping tail and she calmed down within a minute or two. The rescue boat came to meet us and the manatee (we named her Sierra) was gently hoisted by the boat-based team onto the back deck of the boat. The boat is modified to take on water, so the manatee is not being dragged by her stomach across the stern and the propeller is fore in the boat, so no one (humans or manatees) risk being injured by the prop. The boat relocated to a calm shore site where everyone could get involved in the biological assessment of the manatee. For the next hour, the USGS team and the volunteers worked diligently to take measurements, collect stool and urine samples, take a tissue biopsy, and to carefully attach a non-invasive belt that has a GPS transmitter attached for tracking the manatee. Sierra the manatee was in a calm state throughout the process and she only needed encouragement to breathe every few minutes since she was out of her element. Manatees don’t spend time out of the water, so in order for her to take a breath, water had to be poured on her face to stimulate her nostrils for a breathe. She was taken back to the cove for release and the day was deemed a success. 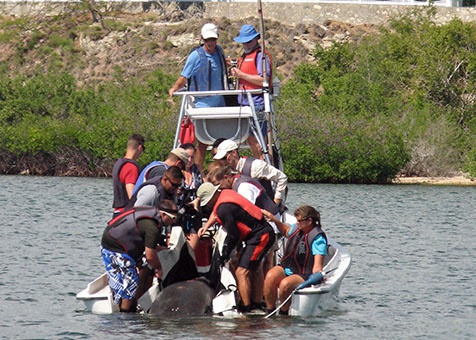 Though we returned to the States on November 12th, the USGS finished a few more days of successful research where they caught seven manatees (and radio-tagged four); small adult female, medium-sized adult male, medium-sized adult female with calf, sub-adult female, and two juveniles. It was an exciting and educational volunteer experience for all of us to be involved in and we were proud to represent GISi during our time in Guantanamo Bay, Cuba.

Images courtesy of the author