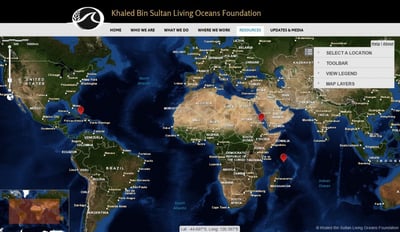 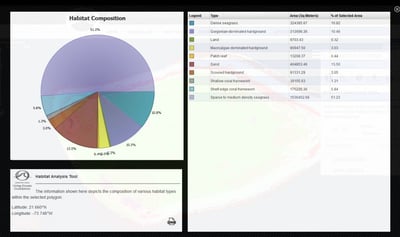 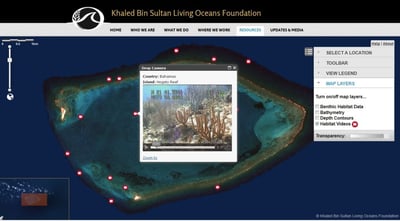 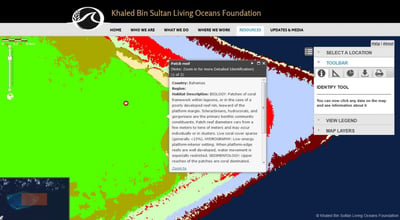 We developed a reef map viewer for the Khaled bin Sultan Living Oceans Foundation, a 501(c) (3) non-profit organization based in Landover, Maryland. The coral reef map products found within the viewer are the result of years of work by an extended team of dedicated scientists and many months of field research in remote regions of the world. The intent of the reef map viewer is to provide a single, cost-effective, web-based platform of access to the Foundation's benthic habitat maps that can support current and future habitat maps, as well as to integrate the ability to download data so that users do not have to go to a separate data portal. The reef map viewer allows for access to detailed coral reef habitat data by all types of users, from the student looking to explore coral reefs on the web to the scientist who needs to download the data for use in scientific research.

The viewer displays queryable benthic habitats and bathymetric data in areas where there are coral reefs, all derived from high-resolution DigitalGlobe, Inc. satellite imagery. The web map viewer is also host to a unique habitat analysis tool that allows users to draw a polygon area of interest and generate a report on the benthic habitats that are within that polygon. The viewer contains underwater photos and habitat videos from the Living Oceans Foundation's research around the world.

The viewer is built on top of the HTML5 front-end utilizing a custom implementation of the Esri JavaScript API v3.5 for the mapping capability. jQuery and jQuery UI are responsible for the look, feel, and usability of the application, which was built to accommodate a workflow desired by the Foundation. Also, in order for coral reef scientists to view and share data anywhere, the viewer allows for the user to download the Foundation's GIS data for use in their own research. Users may also access the Reef Map Viewer on any mobile device thanks to a fully device-responsive design.

As the Living Oceans Foundation continues its research, GISi will continue to work with the Foundation to integrate their new, high-resolution benthic habitat and bathymetric data, as well as further customizing the reef map viewer to fully maximize the interactivity of the reef maps on the web.