AG4LG Use in Helping Local Government Stay Accountable to its Citizens 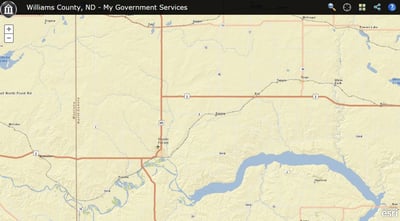 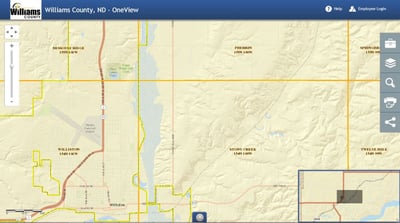 Williams County is located in the northwest portion of North Dakota. It lies on the border of the state of Montana and the County seat, Williston, is 70 miles from the Canadian border.

In 2013, GISi worked with Williams County to establish an Enterprise GIS foundation by implementing ArcGIS Server 10.1 and ArcGIS Online. In late 2014, GISi was then requested by Williams County to assist them in taking the next step inside Enterprise GIS. Williams County was looking to upgrade to the current release, ArcGIS 10.2.2, and to deploy multiple web/mobile GIS solutions that would support County workflows, information sharing, and to provide information to its citizens through intuitive, single focused applications.

The County took a hybrid approach to accomplishing this next step through a combination of multiple, single focused, web/mobile solutions powered by Esri and the ArcGIS for Local Government (AG4LG) initiative along with a more traditional GIS Viewer, GISi OneView, which was developed by GISi.

In addition to upgrading to ArcGIS Server 10.2.2, the AG4LG jumpstart package for Williams County included implementation of the Local Government Information Model (LGIM), then migrated existing data into the LGIM. Through this and a knowledge transfer, Williams County also had integration to its Tax System for additional Parcel Information occur, had the Local Government Maps & Apps Gallery become available in ArcGIS Online and was also able to configure and deploy the Election Polling Places App, Tax Parcel Viewer App, My Government Services App, and the Sign Inventory App.

GISi OneView was implemented to meet the growing demand by Williams County to interface with GIS data via mobile devices such as tablets and smart phones. GISi OneView provided both Williams County and public users' access to a rich, simple to use, mobile device accessible web viewer. GISi OneView included a customized TriView that allowed users to identify a location and then explore that area from three different perspectives. The three perspectives were presented side-by-side in separate panels that included Williams County's oblique imagery in the form of Pictometry, 2014 aerial imagery and street network in the form of locally hosted ArcGIS Server map services.

This successful ArcGIS 10.2.2 upgrade and deployment of multiple web/mobile GIS solutions is able to properly support Williams County workflows, information sharing, and provide information to their citizens through intuitive, single focused applications. This approach enabled Williams County to proactively engage with their local community by making it easy to access key government information and to show accountability to their citizens thru government transparency.