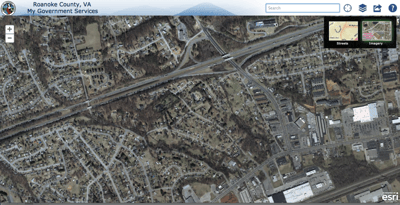 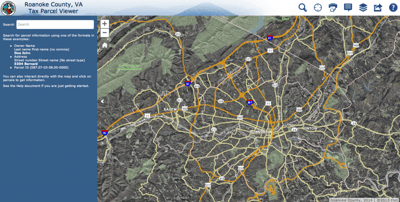 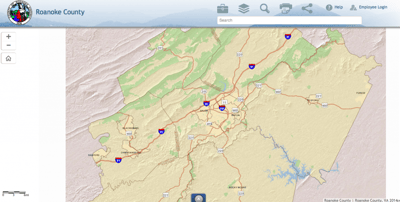 Roanoke County Virginia has an established GIS program that has a proven track record internally. Although they offered a public facing, GIS-based website, they also recognized the need to adapt to technology trends to provide better access to the wealth of information held by the County. What they were looking for was more than just a new application to replace the old, but rather they were looking to establish a web presence that could cater to a broad user base with diverse needs and technological capability. The County had a vision for a GIS portal that was comprised of a series of applications, including both highly focused (simple) and comprehensive apps. Likewise, they wanted to ensure that the solution supported multiple platforms, including desktop PCs, tablets and smart phones.

With our support, we put together a hybrid solution that leverages many aspects of the Esri platform, including ArcGIS for Server, ArcGIS Online and ArcGIS for Local Government application templates combined with custom development. This approach took advantage of data that already existed within the County, including Pictometry, but which had historically been accessible to only a subset of the potential user base and even that was skewed toward internal users. In the end, Roanoke County has established what has effectively become a GIS portal containing a suite of seamlessly interlinked sites that can help guide users to the information they want or need.

The foundation of the site is a version of the GISinc OneView framework, an HTML5/JavaScript application that offers comprehensive functionality and helps fill the persistent demand for a traditional GIS viewer with a robust tool set. Through OneView, intermediate to advanced users have access to explore and analyze based on access to a rich set of data, but can also link directly into more focused apps designed for a singular function.

Those focused apps, in fact, make up another core element of the Roanoke portal and include Esri's Tax Parcel Viewer (TaxView), My Government Services (GovView) and Polling Locations Viewer (VoterView) application templates. Each of the templates provided base functionality that jumpstarted the implementation, but the County's vision included ensuring that there was consistency across the apps and as such the templates were modified to include a custom search that paralleled what is available through OneView. The Tax Parcel Viewer template was modified more extensively to incorporate different data feeds, integrated GeoEnrichment reports (via ArcGIS Online) and to over-ride the built-in reporting engine with a newly developed, highly interactive Property Report.

The Property Report was designed and developed specifically for the County and is accessible directly through multiple applications. Initially modeled after the Zillow reports, Property Reports allows users to control the content that is included within the report through a very simple interface via nothing more than checkboxes. The optional maps (ArcGIS Server, Pictometry and StreetView) are interactive, allowing the user to zoom and pan to the area of interest, which will be persisted into the report product. The PDF that results is tailored to the user and, where relevant, has dynamic links back into some of the source applications.

In addition to the applications described above, the County wanted to further leverage the Pictometry imagery in an application that offers synchronized interaction between a basemap, street level imagery and oblique aerial imagery. The result is a customized application referred to as TriView, which offers a unique exploratory quality that can facilitate operations throughout the County, from Public Works to Fire & Rescue.

Even prior to the official launch of the new system, the County was realizing return on investment through increased operational efficiencies. The Real Estate Valuation Department was able to quantify a net positive effect on finances and the functionality has triggered interest in Economic Development throughout the County. The Stormwater Department demonstrated a savings in personnel hours and, perhaps most significantly, Fire & Rescue leveraged the technologies to help save the lives of stranded hikers.