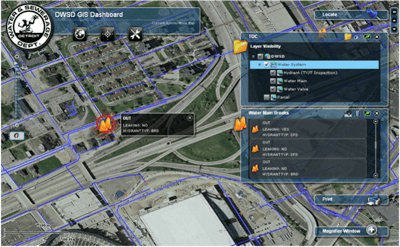 The City of Detroit Water and Sewerage Department (DWSD) manages one of the largest water/wastewater systems in the nation, providing water service to roughly 40% of Michigan's population, spanning an area of 1,079 square miles, and consisting of over 3,400 miles of sewer main.

Accordingly, DWSD is constantly searching for tools and technologies to help manage the underlying infrastructure. Over the years, DWSD has established extensive and valuable data, but often developed or maintained by different departments in various formats. Recently, DWSD has directed significant attention toward consolidating and standardizing that data and establishing a more efficient means of getting that information into the hands of planners, managers and field crews where it is most valuable.

Although DWSD has made a significant investment into the hardware and software infrastructure necessary to support an enterprise GIS, centered on Esri's ArcGIS Server suite of technologies, they were looking for assistance to establish an architecture that would optimize this investment and provide a scalable system that could accommodate growth as GIS increasingly becomes part of the DWSD core business.

Additionally, with such a long and rich history of infrastructure management, DWSD's data holdings have been managed using numerous technologies and standards, each of which potentially introduced error of various degrees, many of which can be corrected. DWSD would like to leverage Esri's technology to develop automated, or semi-automated, methods to correct systematic data issues.

We performed an evaluation of the existing DWSD GIS hardware and software environments, including custom applications, to help identify immediate and future needs. This evaluation resulted in a technology roadmap, of sorts, that provided DWSD with a clear approach towards establishing a true enterprise GIS, which could be achieved through a phased implementation.

DWSD reviewed the plan and ultimately decided to partner with us on the first several phases of implementation. Phase 1 focused on addressing the immediate need for hardware and software upgrades and the migration of a legacy ArcGIS Server application. Phase 2 included the following:

The Design was comprised of interviews and client reviews with key users of the existing 9.1 Web ADF tools. The feedback provided by DWSD helped the design of an upgraded user interface that helped select the appropriate development language. Additionally, the design phase helped us determine the most appropriate development language: Flex, authentication/security mechanism and overarching logical architecture. The Design resulted in a comprehensive document of functionality and architecture requirements that were approved by DWSD prior to initiating development.

We developed the Web Tools using an agile approach that ensured DWSD could see the progress being made and inject feedback along throughout the development cycle. The wireframes created in the Design phase serve as the official guide for development. Web functions include: Water Main Breaks, tools to access images and video from features (i.e. hydrant inspection photos, Contract drawings, sewer inspection videos), Access Security, meter monitoring, search, and Image Server. We installed ArcGIS Server Image Extension. The existing DWSD images stored in ArcSDE are being migrated from SDE onto the server running ArcGIS Server Image Extension. We configured ArcGIS Server Image Extension for optimum image serving performance.